I recently took a trip down to a local record store here in Hickory called Crate Diggers Vinyl And More. The trip I ended up making rekindled a desire to start collecting again, this time my fixation fell upon CDs. While not as flashy as a vinyl collection, I used to burn CDs and trade them around school! So, it also satisfied my nostalgia craving as well in that regard!

This will be the first of what I plan to turn into a recurring batch of articles showcasing not only the music I find around North Carolina but also the wonderful places that I find the treasures I end up taking home in.

I found Crate Diggers Vinyl & More in beautiful downtown Hickory, in a shopping center known as Union Square, it shares a building with Bottega: A Soulful Place. Brent and Allen have been running Crate Diggers since May of 2019. They cater to all kinds of music fans, be you a new collector such as myself, or a seasoned vinyl veteran! Their selection of merchandise reflects how broad of an audience they cater to.

When I first came upstairs, I was greeted with a shelf of new arrivals and records that were being highlighted. The store then opens up to a large space with crates lining every foot of the shopping area. There is always music playing (usually Classic Rock of some kind), and customers shopping happily, the atmosphere is lively and very welcoming. The staff are very helpful and knowledgeable and always happy to help you find exactly what you’re looking for! The prices are always fair, be it for CDs, vinyl, cassette, or even their movie selection.

I found the CD selection in front of more vinyl crates that function as the check-out counter as well. though the CD collection isn’t as extensive, you’re more than likely going to find some treasures! Vinyl heads will love this place way more than somebody like me. I will certainly be coming back here again to see what else I can find!

I was lucky enough to have a few of my questions answered by one of the owners of the shop! I asked Brent Goodson a few things about the store, his music collection, and even his favorite sport!

When it comes to the name of the store itself, Brent and Allen, “Wanted something that sounded dark and fun at the same time.” They opened relatively quickly, but just as quickly as they opened they agreed upon the name!

Brent has been collecting music from around the age of eight and has carried that passion with him ever since, “My mom bought me a Coolio Kris Kross cassette and I’ve been addicted since.”

When it comes down to having a favorite album it was hard to name anyone in particular, “I honestly have had a lot over the years that could have been my favorite, but as a music lover it’s hard to pick just one.”

My favorite piece of information that I gathered from talking with Brent is learning about one of the coolest pieces of “music” he’s seen come through the store, “We’ve had a lot of high dollar albums, and 45s come through the shop, but the most unique would probably have to be a recording of the Jim Jones sermon on vinyl.”

Learning that the shop loves focusing on local and larger artists alike was really heartwarming, and there’s been one rather famous artist who’s come through there before, “The only artist we’ve had in the shop was Abby the spoon lady. We’ve had a lot of local artists and are always working on artists that are coming through hickory.” It turns out Abby is from my hometown of Wichita, Kansas. Small world!

To end the questions out, I asked Brent about his favorite sport, Hockey! His answer might surprise you in regards to his favorite team, “The New York Rangers. Most folks would think since I’m from North Carolina, that I’d have to be a hurricanes fan, but I bleed Blue! Let’s go Rangers!”

I went in without having any specific genre I was looking for in mind, so the bin was my playground. I walked away with more Black Metal albums than I anticipated, and that’s not a bad thing! The CDs I knew I would enjoy were Modest Mouse’s 2004 album Good News For People Who Love Bad News, and Fugazi’s 2009 re-issue of 13 Songs. I also picked up the 2016 Gorguts album Pleides’ Dust, just good old Canadian Death Metal.

The two Black Metal albums I picked up were Wolves In The Throne Room’s 2011 album Celestial Lineage, and Gorgoroth’s 2015 album Quantos Possunt Ad Satanitatem Trahunt. When it comes to Black Metal, I had yet to find the kind that resonated with me. That was until I gave that Gorgoroth album a listen. It blended the visceral aspects I enjoy of the genre without sacrificing production quality. It also blends in elements of Melodic Death Metal flawlessly! Celestial Lineage showcased the more symphonic and emotional side of Black Metal that I also enjoy while still retaining a beautiful harshness.

I’d like to highlight the 2014 album The Ape of God II by Old Man Gloom. I went into this album completely blind and came out a changed man. This noisy, unapologetic, dramatic Blackened Doom/Extreme Metal album is a chaotic assault on the senses from track one.

“Burden” is a 13:25 test of patience with a glorious payoff. The first two minutes and change of the track consist of one extended piercing note that then gives way to a slow rift set to sounds of static in the background. The song continues to build until around six minutes in when we get a taste of Aaron Turner’s vocals for the first time. The harsh, guttural vocals help further intensify the oppressive, and slightly schizophrenic, feeling this album puts off. This feeling is exemplified on the following track “Predators.”

While “Predators” is the shortest track on the album, it makes up for it by being a relentless, crushing track that easily makes it my favorite on the album.

The final track of The Ape of God II is “Arrows to Our Hearts.” This song has the only clean vocals found on the album and is a welcome break from the cacophony of sounds explored on this journey. The clean vocals don’t last long, and the album ends just as brutally as it started.

Overall, I would definitely recommend this album to an avid metal fan who is looking a little different. If you’re just getting into metal, however. Regardless, if you do come upon this album and decide to give it a listen, prepare to go on a wild ride that is sure to get and keep your blood pumping!

I couldn’t have asked for a better experience from Crate Diggers Vinyl And More. Everything about the shop itself and the owners is a delight! If you find yourself in the area, stop on by, and don’t forget to pet their wonderful store dog while you’re there!

I can’t wait to see what else is out there in North Carolina when it comes to music shops. I have my sights set on a shop out in Valdese that will be my next stop! With any luck, it will give way to another wonderful adventure! Keep your eyes peeled for the next Bargain Bin Adventures, stay safe out there folks.

Dig this article? Check out the full archives of 8-Bit Brutality, by Matthew Crabtree, here: https://vwmusicrocks.com/8-bit-brutality-archives/ 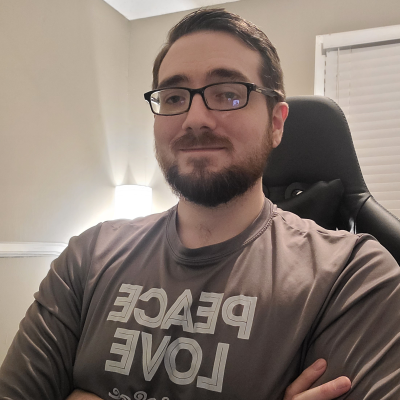 Originally from Kansas, now living in North Carolina, "in his day job," Matthew bakes third shift. When he's not working, Matthew can usually be found spending time with his beautiful Girlfriend, and their son, listening to music, or playing some kind of game -- usually at the same time. Matthew's tastes in music vary widely, but he tends to always come back to Metal of all kinds (though admittedly mostly Heavy, Death, or Technical Death Metal). You can also catch Matthew getting down to some soundtracks and classical! At the end of the day, Matthew is really just a dude. The dude abides.
mattcrabtree255@outlook.com