From the cradle, music had always been around Bernardo Tinoco, since his father is a musician himself. After attending an atelier at Lisbon’s Metropolitana School Of Classical Music, Bernardo found himself lost in his choosing an instrument to pursue his studies in music.

Indeed, the saxophone chanted his name the loudest.

Bernardo had started, then, his studies on Classical music, which he saw right away was not what he had wanted. He then enrolled in Hot Clube Portugal and started studying Jazz music. Not much time later, Bernardo decided to go back to Classical music and studied both genres in parallel.

Currently, Bernardo is the proud owner of a Bachelor’s degree in Jazz music, obtained at Escola Superior de Música de Lisboa (ESML), and is presently studying Education — in the field of music — also at ESML.

Influenced by the tone and style of Jazz legends, Charlie Parker and John Coltrane, mostly, whose freedom in improvisation gave way to new ways of playing. But Bernardo is not only affected by old-school legends, but also the new-school, soon-to-be legends, such as Ingrid Laubrock, Tim Berne, Chris Speed, Wanja Slavin, and Steve Lehman. In Bernardo’s eyes, this new wave of Jazz players has come to represent what Jazz has become in its evolution.

A different style Bernardo sees himself playing is that of musicians, Peter Eldh, and Otis Sandsjö. In searching for a new kind of sound, two wind instrumentalists, Bernardo himself, and João Almeida, a trumpeter, sought musicians who could fit the style they wanted to produce, and, in June of 2021, their band, GARFO, released their first album.

Indeed, this constant search for something new, and the thirst for diverse musical patterns are some of the things that move them, and also connect them. Their music gives a lot of space for improvisation. In Bernardo’s words, the music of Garfo is, “A static type of music — that is static in what’s previously given — that leaves itself open to interpretation, following whatever pathway the musicians see fit; as if a launching pad to wherever.”

If one is to ask if there is any meaning in their music, Bernardo tells us head-on that, “When I play, I do not think about sending any specific message — as Coltrane used to do in sharing his spirituality through his music — nor do I find music as a means to communicate something I cannot by mere words. I only play music because I like to.”

Well, one can say that there’s a message, indeed. As Bernardo enjoys playing music, he wants his listeners to enjoy what he plays, in the same way, he’s enjoying himself when he performs, either in the studio or live. To share the experience of joy he gets from music is the message Bernardo Tinoco wants to send. And although Bernardo may not be sure if his music has changed someone’s life, he hopes it has — for the better. If it made any given person feel motivated to get outside, and watch a concert, either his or another musician’s, then that is considered a victory for him.

As some of his biggest fears, he shares with us, “Not being able to live off of music; feeling a creative block; not being able to achieve a level I want to professionally.” And, as Bernardo says, “It is a common and needed strategy to step away from music for some time, to clear my mind. One can get tired. A musician’s mind is designed as a library. If one gets to read several books and leave them out of the shelves, the untidiness will slow one down and weigh. And that refresh, the clearing of ideas, is good also to acquire a new arsenal of possible solutions for melodic phrases, and not fall into the same and repetitive melodic resolutions.”

As for obstacles, the main issues Bernardo has had to overcome were difficulties he had in regards to the execution of things he could understand theoretically, but could not transpose to the instrument. While Bernardo could see clearly how he could do it, and what possibilities he had, while transposing, in a practical manner, he couldn’t manage to get it done. It came down to a matter of task overload, where
Bernardo had to manage his time between Jazz school, Classical music school, and secondary school.

Still, Bernardo always had his parents’ support and felt continually motivated to keep on track to make music. Not only did he have the support from his family, but Bernardo had access to musical knowledge, something he had inherited not only from his father but from his grandparents as well, for they were also musicians.

Besides Garfo, a project in which Bernardo is looking to expand upon the band’s formation, and in doing so, experiment with something greater with the release of their upcoming album, yet untitled album. There are some other interesting projects on the horizon too — a duo with the drummer João Sousa — a kind of project open to an improvisational adaptation of Kabalevsky’s piece for solo piano.

Also in the works, is a trio project with Diogo Alexandre, and André Carvalho’s compositions, to be
recorded in early 2022 — musically exploring Serpa’s urban myths, adding sounds of nature, and colloquial jibber-jabber.

Still another project, this time with Tom Maciel, also a multi-instrumentalist, on the piano, synth, and drum-machine, with Bernardo, adding other layers in terms of saxophone, as well as other wind instruments, and on the duduk — an Armenian percussion instrument— and João Pereira as a guest musician on drums, to interpret the songs in a free and personal way. This project’s composition seeks
to hang on to a written score, and all the writing is done by the collective together, never separately.

In January 2022, if you happen to be around Portugal, you’ll have the opportunity to check Bernardo while performing with Lilly Ketelsen, and Bruno Ponte on the 19th, at INSITU, Lisbon; with Garfo, on the 21st, in Matosinhos; with Francisco Nogueira, and Lisa Wilhelm, on the 26th, at INSITU, Lisbon, and with André Carvalho, and Diogo Alexandre, on the 29th, at Musiberia, Serpa.

Interested in learning more about Bernardo Tinoco? Check out the links below: 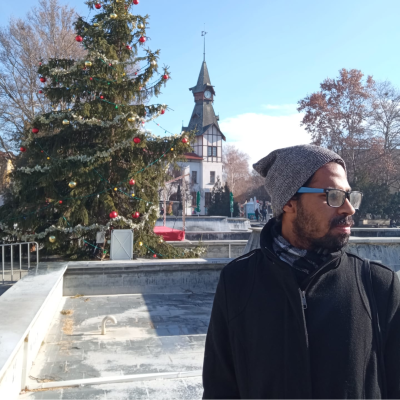 Born and raised in Portugal, with an ever-growing love for knowledge, and an ever-increasing interest in teaching, Fábio teaches Creative Writing at the Senior Academy (Sintra), and music as a freelancer, and is presently working as a tutor.
fabiorubenmoniz@gmail.com